The Bible never depicts this world as being fair but it does show us a way through the trouble.

A very Jewish tale is told in Mark 6: 17 – 29.  In summary, Herod divorces his first wife to marry Herodias.  John the Baptists suggests that this is not a good idea.  His advice angers Herodias who decides he needs to die.

Herod liked John the Baptist.  He liked to listen to him even though he didn’t understand him.  He didn’t understand him because he refused to follow the heart of the message–to repent.  He refused to turn from being his own Lord to the humility and faith which allows what is good and holy to take hold of him.  So, when Herodias became angry, in order to keep the peace in his home, Herod had John the Baptist arrested. 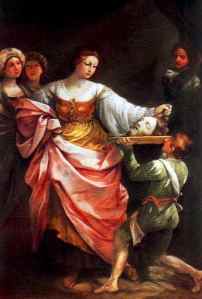 On the day of Herod Antipas’ birthday, Herodias gets her revenge.  It begins when her daughter dances for King Herord and all the guests.  Artists have captured this dance on many canvases.  This one, from Reni who lived in late 1500s, portrays the daughter as aloof, dancing, holding the hair of John’s head as it is presented to her.

It is a picture of a great wrong.

I wonder what she, the daughter of Herodias, understood?  Did she know the game of power being played by her mother?  Maybe not for the word used for the daughter is “girl” not “woman.”  The same Greek word is used earlier in Mark for a 12 year old girl who Jesus lifts out of death.  When the dancing girl of the banquet is offered half of the King’s kingdom, instead of saying, “alright!” and living large, she goes to her mother, and says “what shall I ask for?”

Evil manipulates the one with the crown, of one who refused to learn the language of humility, or faith, or grace.  Take heed.

The story suggests evil is born of a grudge and spread by the innocent.

A simple birthday party, a celebration of life, corrupted.

On the one hand, I want to condemn Herod Antipas.  Herod–the man who is the center of his own dance.  He makes himself an easy target.

On the other hand, how many times have we held in higher regard something other than what is right and holy?  Even Peter denies Jesus when push comes to shove.

It is hard to hold on to what is right and holy.

I have opportunity to speak to couples now and then.  Everyone fights.  There should be a book about that for couples similar to the one for mothers and their little children called “Everyone Poops.”  Everyone fights.  This is true about all our relationships—friends and coworkers alike.  What often happens is we feel slighted in some way.  The other doesn’t understand us.   Lists of wrongs are kept.  Anger grows.  We’ve tried everything, we say, as the one who we once loved and respected becomes the enemy to our peace.

The best general reminder scripture gives about all of our relationships is that our first priority is not the happiness of the other person.  Herod tried to make his wife and niece happy and it led to the death of the holy one.

Our first priority is to do right by God, to hold on to what is right and holy in ourselves and in the other.

As Christians, we do this by looking to see Jesus. 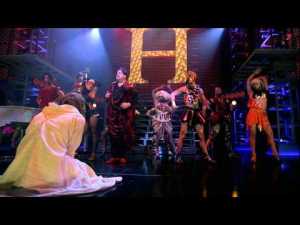 In this scene from the rock musical Jesus Christ Superstar, Jesus has been brought to Herod Antipas having been arrested for treason.

It takes time to find Herod among the dancers, underneath the many bulbs that light up the “H.”  But it is not hard to see Jesus there in white lit robe in the foreground.   In the midst of all that is wrong, there is Jesus, waiting.

When we look to see Jesus at work in us and in the other person, we will often find him there, kneeling before the Herodian dance, the ego’s masquerade, waiting for us to repent.

Look for him.  Call for him to stand up.  Unbind him.

Martin Luther King Jr. fought for equality, not with a violent revolution, but with a Christian witness calling the enemy to take hold of what was holy and good in them.

Look for Jesus.  You may not ever be offered half of the King’s kingdom but you will see your way through to what is good and holy.   That is enough to change your world!

One thought on “Change Your World”